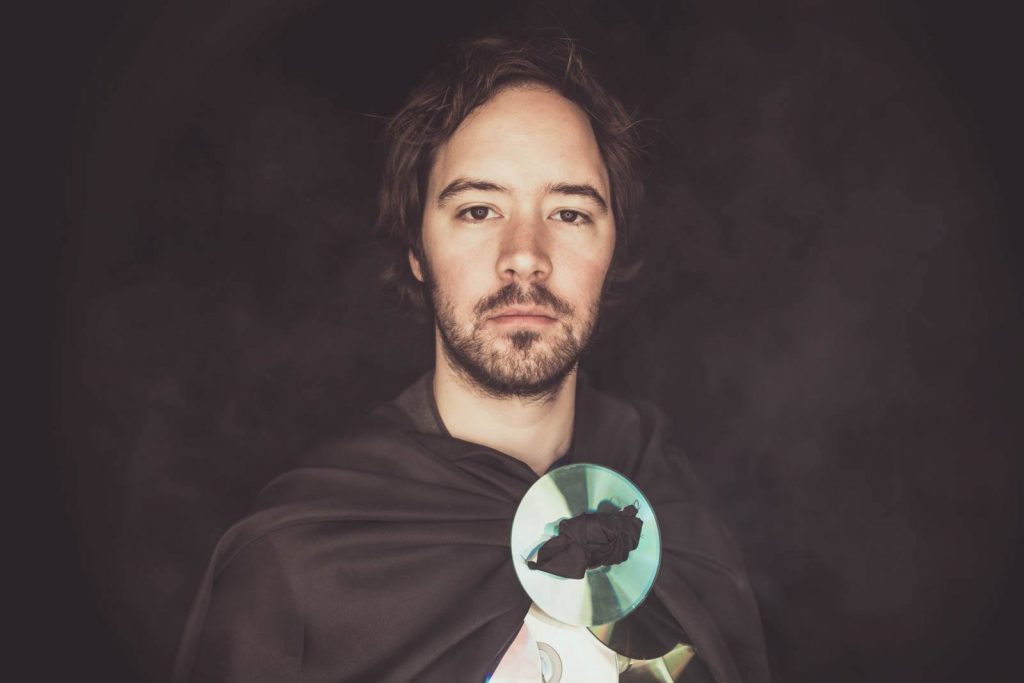 This show is hosted by Sisters Folk Festival. Go to the SFF website for tickets.

For this show, Andrew will be joined by his Buried In A Cape recording band: Christian Sedelmyer, Eli West, and Clint Mullican. This cast of players have history with a list of roots music luminaries including Jerry Douglas, Bill Frisell, Tim O’ Brien and John Reischman, alongside their acclaimed solo projects.

You may be familiar with Andrew Marlin from his involvement with Chapel Hill, NC duo Mandolin Orange. As the songwriter for the band, Andrew has become known as a gifted lyricist, producing powerful yet subtle, thoughtfully crafted songs. With Mandolin Orange, Andrew has toured the world, gracing famous stages including the Ryman Auditorium, Red Rocks Amphitheatre, and Newport Folk Festival, to name just a few.

Buried In a Cape, Andrew’s first instrumental solo release, debuted in September 2018. The album is an eclectic collection of his instrumental work, modeled after one of his heroes — John Hartford — who as legend has it, was buried in a Batman cape. The recording session for this project was scheduled on a whim at the Butcher Shoppe in Nashville, with Eli West (guitar, banjo), Christian Sedelmyer (fiddle), and Clint Mullican (bass). The compositions highlight Andrew’s skills as an instrumentalist, while showcasing that his writing skills are not confined simply to poignant lyricism. Although the tunes have been making cameos in Mandolin Orange sets, these winter west coast shows will provide an outlet to experience Buried in its full, instrumental glory.

With Buried, Andrew follows in the footsteps of his previous accolades with MO. The Mandolin Cafe said “Marlin joins his heroes as a mandolinist of note, and a talent for the ages,” while Red Line Roots praised the album saying, “Buried In a Cape is (in my opinion) the best record to be released in 2018. For those of you who are already fans of instrumental music, this will be your go-to for years to come. For those who are not fans of instrumental music, listen to this album and then I’ll say ‘welcome to the club’.”

The evening starts with local band Skillethead at 8:00, opening for Portland-based band — 2019 RockyGrass band competition winners — Never Come Down who weave Americana, Bluegrass and other styles into their beautiful and unique brand of music. Doors open at 7:00. 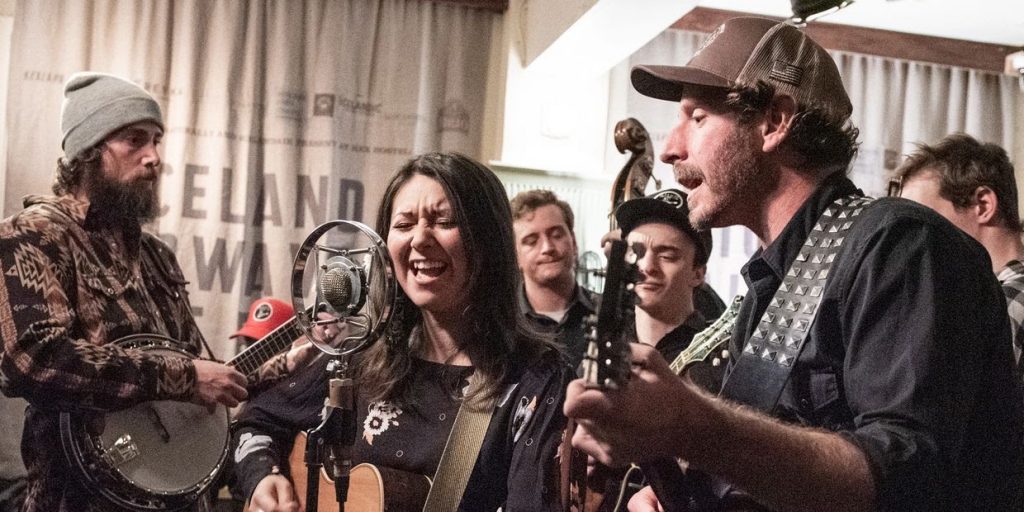 “If you never take a chance, you can never get it wrong … so you better take a chance before it’s gone.”
These lyrics from the song “Chances” on their self-titled debut album have become a mantra for the members of Never Come Down.  As Joe Suskind puts it, “I suddenly had all these opportunities — hosting a weekly bluegrass showcase, meeting a publisher who liked my music and finding musicians who were writing, playing, and aligning their lives with their craft like me. We all felt the pull to take a chance on our music and each other. We’re taking a real swing at it.”

Earnest songwriting, dedication to craft, and genuine care for the music is at the forefront of what they do. “We never tell each other what to play. You can feel when the music is right.” It’s that feeling — that space Never Come Down creates — that has captivated audiences from the onset. 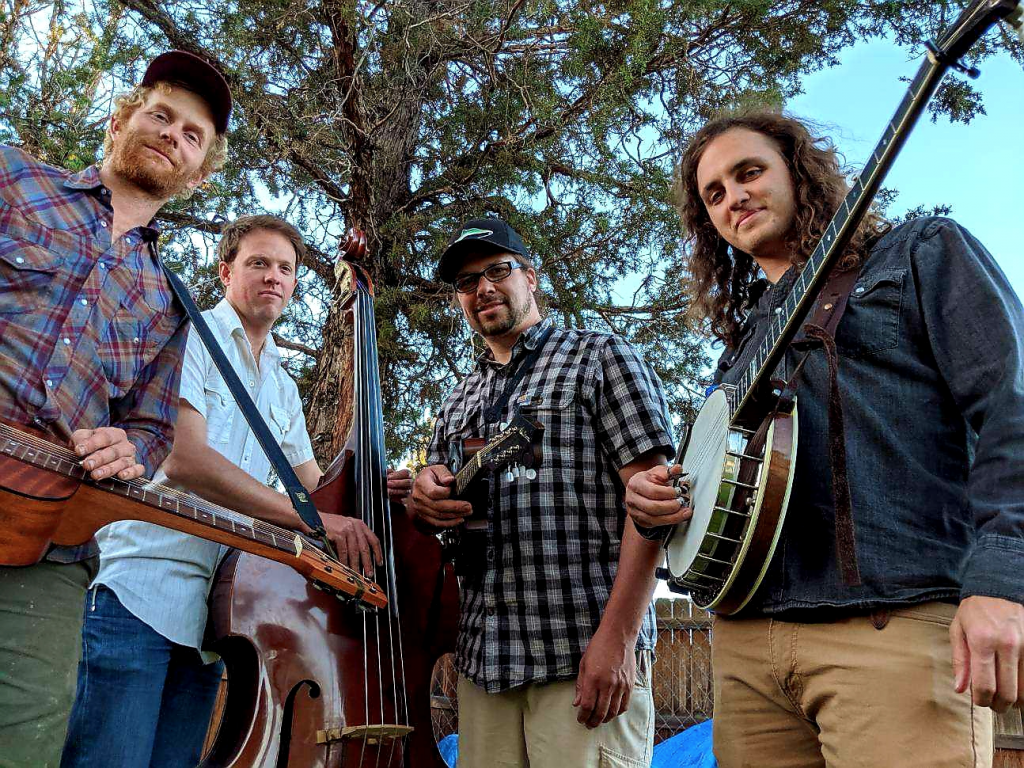 They are pungent, not subtle. The people who are experiencing them are well aware that they’re doing something wrong, but the self-medication takes, more times than not, and they’re able to withstand it all. They fall into problems and rarely, if ever, claw their way out of them. It’s just one black hole of issues swirling around them, stinking up the place. Kevin Blackwell, the lead singer for the dirty bluegrass band out of Portland, Oregon, encapsulates the general character who calls these songs home, on “Mary Celeste…All this misery keeps great company. It’s the liquor cabinet that takes a hurt. 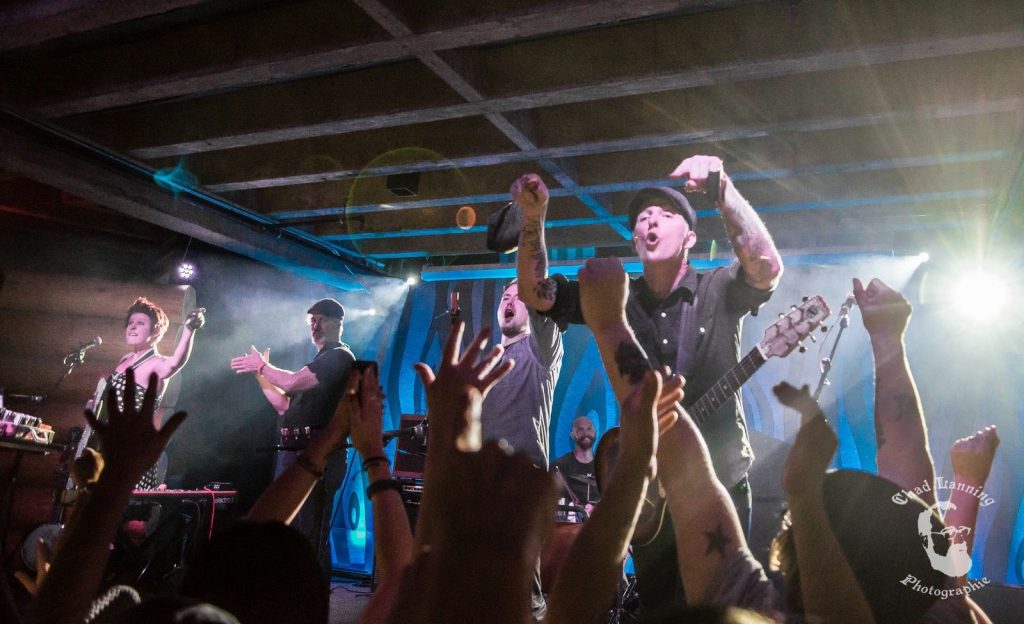 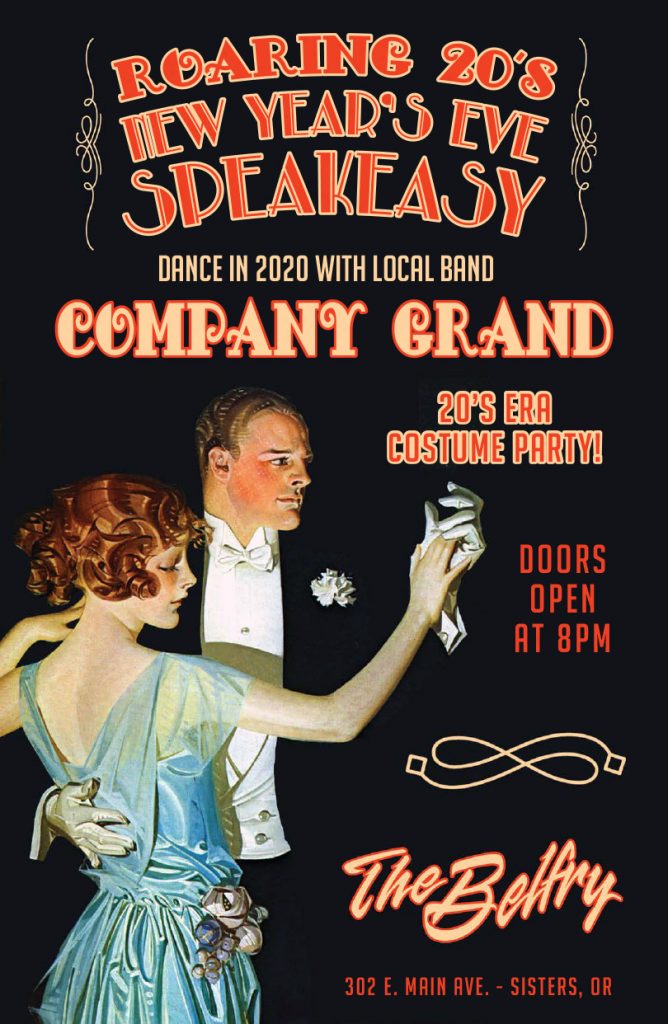 Ring in the New Year with a flashback to the Roaring Twenties! Wear your finest to slip into the Speakeasy mentality and dance to fabulous local band,

Started in the Summer of 2014 by Lucas James and Riley Winslow, Company Grand is a 9-piece exhilarating band that performs a range of Rock & Roll, Blues, Funk, and Rhythm & Blues originals – along with a wide array of covers.

Their rhythm section is rounded out by Tyler Cranor (Bass), Patrick Ondrozeck (Drums and Keys), and Mesham Jackson (Drums and Percussion). All three studied music at universities across the country, and combine their diverse musical backgrounds to create the most exciting dance grooves you’ll hear. Our horn section consists of Keemun Senff on trumpet, Dan Flagg on Trombone, and Steve Prazek on Sax and Flute. Again, all three are university trained and have played in orchestras and bands for decades. The combination of all of these talented and diverse musicians come together to create the unforgettable experience that is Company Grand. 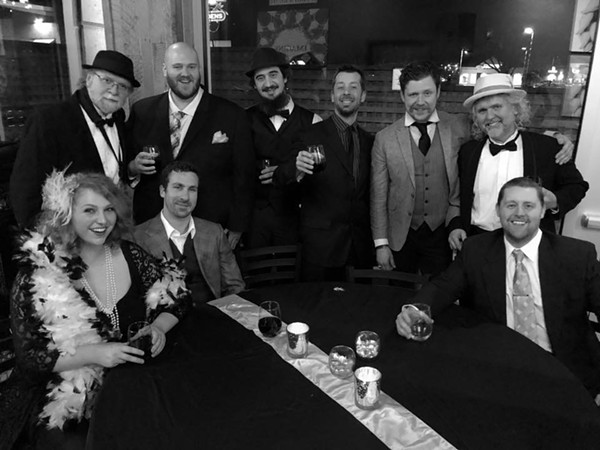 Portland Oregon junkbox blues duo HILLSTOMP is infamous for digging through the dumps and forgotten backwoods of American music, recycling traditional elements into a refreshing and distinctive brand of do-it-yourself hill country blues stomp. North Mississippi trance blues, a bit of Appalachia, and a dash of punkabilly come clanging and tumbling from assorted buckets, cans and BBQ lids, all drenched in rambunctious slide guitar. Somehow it works.

Despite their homemade instruments and novel approach, Hillstomp is no novelty act.

Hillstomp’s memorable live performances tap into a magic that cannot be rehearsed, converting outlaws and traditionalists alike from skeptics into preachers. 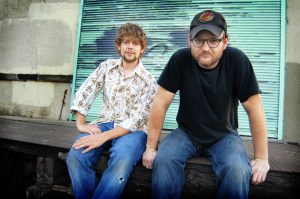 Sisters Science Club presents “Frontiers in Science” — Community Talks at the Belfry during the winter half of the year. Multimedia presentations are coupled with both a wine/beer bar and food service. The talks feature speakers of note who focus on a general topic to spark lively conversations with the audience of adults and students. The programming is organized and led by Kathy Campbell and sometimes co-sponsored by COCC.

General Admission: $5. Teachers and students are free. Social hour begins at 6, and the lecture starts at 7. See you there!

With your help, the Sisters Science Club is creating a community where science is valued, visible, and celebrated. We thank you for your enthusiastic participation in this endeavor!

See the links above to learn more about Sisters Science Club activities, videos of past talks, and specific upcoming talks.

This evening will be a night to remember! Join Sisters Park & Recreation District for an authentic Oriental meal and show located at The Belfry. Entertainment provided by Oregon Tai Chi Wushu. Doors open at 4:30pm, dinner will be served at 5pm with entertainment to follow. To register, please follow the link below: 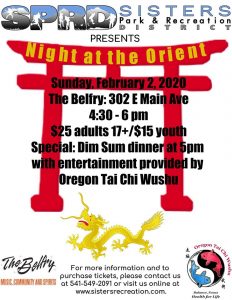 Sisters Science Club presents “Frontiers in Science” — Community Talks at the Belfry during the winter half of the year. Multimedia presentations are coupled with both a wine/beer bar and food service. The talks feature speakers of note who focus on a general topic to spark lively conversations with the audience of adults and students. The programming is organized and led by Kathy Campbell and sometimes co-sponsored by COCC.

General Admission: $5. Teachers and students are free. Social hour begins at 6, and the lecture starts at 7. See you there!

With your help, the Sisters Science Club is creating a community where science is valued, visible, and celebrated. We thank you for your enthusiastic participation in this endeavor!

See the links above to learn more about Sisters Science Club activities, videos of past talks, and specific upcoming talks.

Whether he’s squeezing out the deepest blues or playing the funkiest soul grooves, legendary blues and soul giant Tommy Castro knows how to ignite a crowd. Over the course of his still-unfolding career, the guitarist, vocalist and songwriter has released 15 albums ranging from horn-fueled soul and R&B to piping hot blues to fiery rock ‘n’ roll. He’s performed all over the world, earning countless fans with his legendary, sweat-drenched, exhilarating live shows. Castro’s band, The Painkillers—bassist Randy McDonald, drummer Bowen Brown  and keyboardist Michael Emerson—have now been playing together over four years. After hundreds of live shows, they have coalesced into one of the telepathically tightest units Castro has ever assembled, making them one of the most in-demand live roots music acts performing today. Billboard says the band plays “irresistible contemporary blues-rock” with “street-level grit and soul.”

Classic Western dancing of all types on the Belfry’s sprung wood floor! Dance lessons are at 6:30, and you’ll start swingin’ with the band at 7:30! Dance lessons included in your ticket, and no need to bring a partner. Wear yer boots if ya have ’em, just clean the horses*^# off first!