Join us for this very special concert during the Sisters Songworks weekend featuring our retreat instructors: Beth Wood, Anna Tivel and Tom Kimmel.

Texas-raised, Oregon-based singer-songwriter Beth Wood has labored in the world of independent music for 23 years, morphing from a young, classically-trained, folk-tinged singer-songwriter to a wailing southern rock band leader to a college-circuit coffeehouse sweetheart to a well-respected nationally-touring poet and troubadour. Through all of these incarnations, Wood has remained true to herself and to her artistry; she has done it her way. Out of that fierceness and commitment to her craft comes a canon of work that cannot be denied. Wood’s eleven independently released solo albums and one duo album (Stand and Sway) have gained her a fanbase that is loyal and true, and her creative work has earned her the prestigious Kerrville Folk Festival New Folk Award and the 2019 Oregon Book Award Peoples’ Choice Award for her poetry book Ladder to the Light.

Singer, songwriter, entertainer, poet and teacher Tom Kimmel is all of these things and more. In demand as a songwriting teacher and lecturer, Tom offers workshop instruction tying the creative spirit to the nuts and bolts of composition. For the past 30 years, dozens of Tom’s compositions have been recorded by luminary artists, including Linda Ronstadt, Johnny Cash, Joe Cocker and Randy Travis. A soulful, funny and inspiring performer in his own right, Tom tours and teaches widely. He’s released seven solo albums, published a book of poems, and he’s as vibrant and creative as ever in his sixth decade of music making. A self-described “closet poet” until the publication of his collection The Sweetest & the Meanest, Tom has been a featured writer at book festivals and writing retreats, and his poems have been published in a number of poetry and literary journals.

Portland, Oregon based Anna Tivel reaches for a thread of understanding with her music, that moment of recognition, of shared experience. There are thousands of miles on her touring odometer and each town is a tangled web of heartache and small reasons to believe. She gravitates toward the quiet stories of ordinary life: A homeless veteran sitting on a bench to watch the construction of a luxury hotel… A woman wondering about the life of the daughter she had to give up for adoption… Someone changing shape, someone falling in love, someone all alone.

With four full-length albums, Tivel continues to touch on a common human thread. Her newest album The Question was recorded mostly live at Hive studio in Eau Claire, WI, engineered by the esteemed Brian Joseph (Bon Iver, Sufjan Stevens) and produced by drummer and multi-instrumentalist Shane Leonard. NPR called it “one of the most ambitious folk records of 2019.” 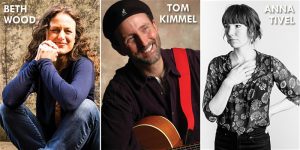